Can avoiding a handful of socially harmful activities virtually guarantee someone will not live in poverty? Social scientists in the United States said they have found the secret, and a new report from Canada has found it also applies across the northern border.

The “success sequence” began with Isabel V. Sawhill and Ron Haskins of the Brookings Institution, who found that meeting a few criteria greatly reduced the likelihood of a family living in poverty: finish high school, work full time, wait until age 21 to get married, and do not have children outside wedlock. Rick Santorum became fond of repeating these conditions during the 2012 presidential primaries, and they passed into broader use.

The Fraser Institute applied these tests and concluded they hold just as true in Canada. The report “The Causes of Poverty,” which was released on Tuesday, found that less than one percent of Canadians who graduated high school, worked full time, and waited until marriage live in poverty.

Specifically, their poverty rate is 0.9 percent.

The poverty rate in a home where at least one person works full time is just 1.7 percent.

The poverty level for all Canadian families is 3.5 percent, but 12 percent of single-parent households led by females live in poverty, as do 14 percent of homes where no one works full time.

“The evidence is clear,” said Christopher A. Sarlo, its author. “There are certain societal norms that, if followed, are key to avoiding long-term poverty.”

Sarlo actually undersells his research: He tested only for those currently living in need, not for those in long-term poverty (which would be lower yet).

Sarlo does not overstate his findings. He highlights the importance of avoiding addiction and a criminal record, which Sawhill and Haskins omitted. And he acknowledges that conditions outside people’s control, such as mental or physical disability and natural disasters, create negative life outcomes. Yet the success sequence predicts human flourishing.

Since its conditions are still normative, few people must deal with the consequences. Only 1.4 percent of Americans in 2007 did not meet a single one of these benchmarks. But they account for 76 percent of the poor and 17 percent of the lower middle class.

The new study is yet another confirmation that work and personal responsibility pay economic, as well as spiritual, dividends. W. Bradford Wilcox and Wendy Wang found in a 2017 AEI study that 97 percent of Millennials who followed the sequence “are not poor by the time they reach their prime young adult years (ages 28-34).”

Charles Murray covered this ground copiously in his Coming Apart: The State of White America, 1960-2010.

“Work does all of the work”

Nonetheless, the theory has its critics on the Left, who blame structural barriers for persistent poverty. The left-wing Vox website is also triggered by the sequence’s implied morality:

Describing full-time work as a “norm” is slightly bizarre, as plenty of people are out of work despite wanting a job.… Treating birth timing as a norm is also strange, as it implies that people have more control over when to have children than they often do.

Matt Bruening of Jacobin magazine called the success sequence “a totally ad hoc set of rules that … allow conservatives to say personal failures are the cause of poverty in society.”

Bruening said that having a full-time job accounts for virtually all the difference. “[N]one of the rules provide meaningful poverty reduction after you have applied the full-time work rule,” he wrote. (Emphasis in original.)

Put another way, he wrote, “Work does all of the work.”

But if full-time employment is the one-step path to success, then the new Jacobins should embrace the success sequence.

Sarlo noted the difference marriage makes in his new study. In the U.S., more single mothers than married mothers are working outside the home. However, more than one-in-four single mothers – and nearly one-third of single mothers with children under six – are unemployed. In a single-parent home, that means zero earned income.

Single mothers earn $20,000 a year less than the U.S. median income, often because they must seek flexible work to tend to home emergencies. There is simply less time and energy to go around when all the responsibilities fall on two, rather than four, shoulders.

Critics such as Bruening should also follow Sarlo to his next unique contribution to the success sequence: After he weighed the data, Sarlo concluded that “the existing welfare system” – or as it is called in Canada, social assistance – “turns out to be the key enabler of poverty”:

In practice, a system that has no employment strategy for clients, has no requirements of them, and expects nothing from them, is simply unhelpful. It slowly traps some people, especially those with low self-esteem and little confidence, into a child-like state of dependency and permanent low income.

Welfare policies that slowly break down the work ethic should trouble critics such as Bruening, et. al., who believe full-time work is the only prerequisite to prosperity. “[B]ad choices and bad luck are not destiny,” Sarlo wrote. But “[b]ad choices can be enabled by ineffective and counterproductive policy.”

Human flourishing, as with all else, is also hindered by the world, the flesh, and the devil. Religion is indispensable in dealing with the root causes preventing people from following the success sequence, which is proven to eliminate 99.1 percent of poverty in Canada. Faith teaches that every human being has worth, all honest work can become a vocation, and that sex should take place only within the context of marriage.

Charles Murray, particularly, has said that religion is:

a resource that can lead people, adolescents and adults alike, to do the right thing even when the enticements to do the wrong thing are strong: a belief that God commands them to do the right thing. I am also invoking religion as a community of faith … that socializes the children growing up in it in all sorts of informal ways, just as a family socializes children. …

[I]t is not a matter of ideology but empiricism to conclude that unless the traditional family and traditional communities of faith make a comeback, the declines in social capital that are already causing so much deterioration in our civic culture will continue and the problems will worsen. The solutions are unlikely to be political but cultural. 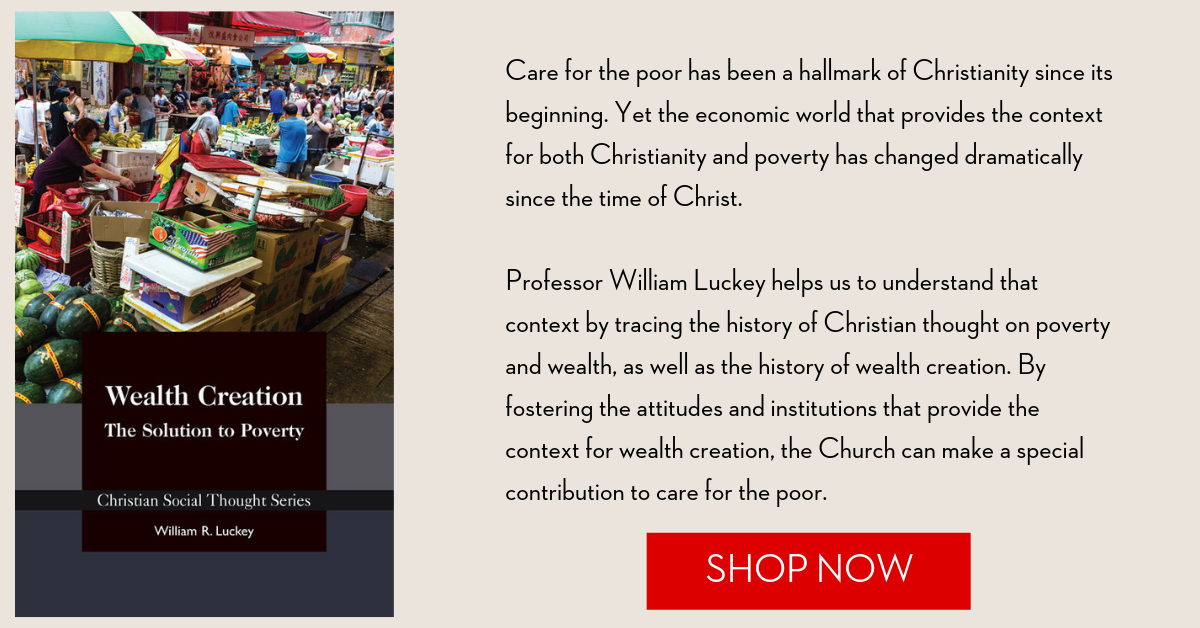