The concepts of toleration espoused by theologians in the officially religious states of the sixteenth and seventeenth centuries deserve closer examination. So argue Tobias Dienst and Christoph Strohm in their introduction to Martinus Becanus’s 1607 treatise, On the Duty to Keep Faith with Heretics. Becanus (1563–1624), a Dutch Jesuit theologian who became court confessor to the Holy Roman Emperor, lived in and supported an officially Roman Catholic state, but this did not prevent him from developing a concept of religious toleration that viewed the toleration of Protestants and other religious adherents as advancing the greater good of society.

This work is not principally a work on religious toleration. Becanus’s main concern is to defend the thesis “that it is morally obligatory to fulfill all contracts and promises unless they are against divine law or in another way invalid.” Specifically, Becanus shows that one must keep one’s promises and honor one’s contracts regardless of the religious views of the other party. Yet, as Dienst and Strohm point out, this principle “also applies to agreements granting religious tolerance to heretics.” The matter of religious toleration is thus a part of the moral question of whether, and in what circumstances, one must keep one’s promises. Like most writers in the tumultuous religious and political context of the early modern era, Becanus did not endorse religious freedom and freedom of conscience as goods to be pursued in themselves. This is clear from his stark denunciations of unqualified religious liberty. Yet, Becanus would change his views on toleration from the more restrictive stance he takes in this treatise. Dienst and Strohm sketch his movement from regarding toleration as permissible for preventing a greater evil in society (such as religious wars) to regarding toleration as permissible for achieving a greater good (such as the possible, future conversion of religious dissenters). The authors observe that this change in Becanus’s view “is a first step toward the idea of tolerance as possibly beneficial to society and not merely as an unpreventable nuisance.”

Theologians from this era typically supported the religious states that upheld their respective confessional persuasions, and these writers often defended the use of force against religious dissenters in those states. More liberal advocates of toleration and freedom of conscience, such as Sebastian Castellio (1515–1563), often had loose confessional affiliation or were in conflict with the Catholic or Protestant authorities. Dienst and Strohm note that in the study of the history of toleration writers like Castellio have received the bulk of attention as proto-moderns, leading many scholars to “skip the time between Castellio and the early Enlightenment altogether.” That’s a gap of roughly 200 years that included hundreds of authors who wrote about toleration, liberty of conscience, and religious freedom. Becanus is one of these overlooked authors—a Catholic writer who developed the concept of religious toleration within a Catholic state. On the Duty to Keep Faith with Heretics, therefore, helps to fill a gap in the common story of the rise of religious toleration in the West. 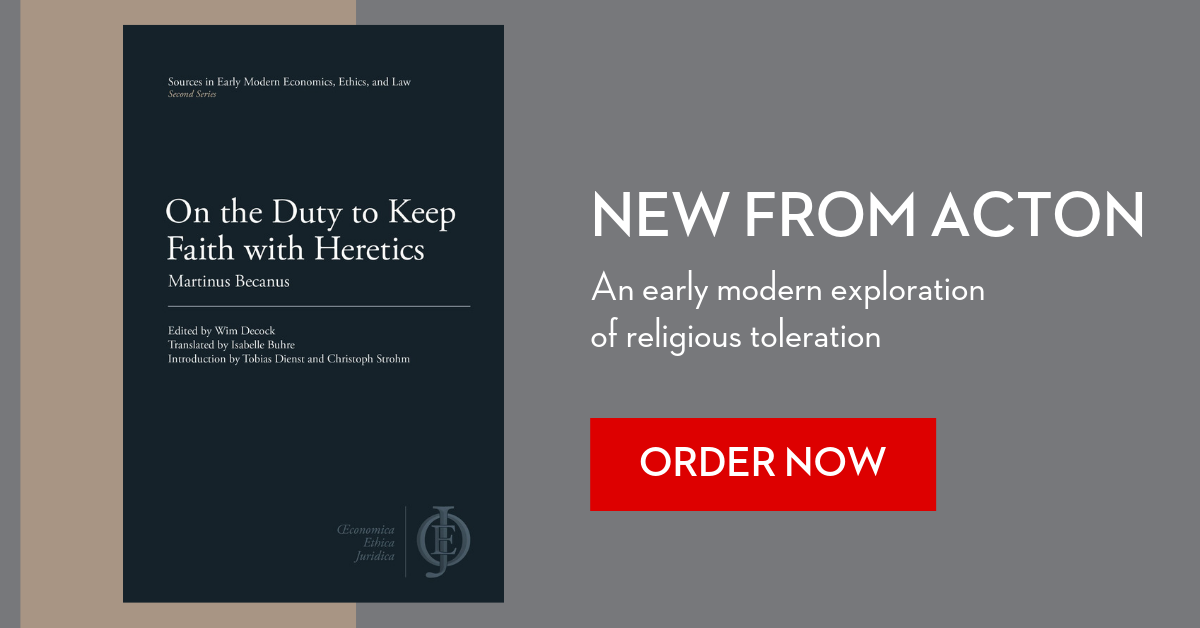 On the Duty to Keep Faith with Heretics, edited by Wim Decock and translated by Isabelle Buhre, is the first English translation of Becanus’s treatise De fide haereticis servanda and the latest volume in CLP Academic’s Sources in Early Modern Economics, Ethics, and Law series.