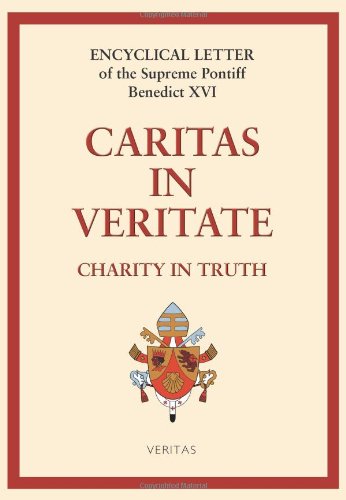 Joan Lewis, EWTN’s Rome bureau chief, covered Pope Benedict XVI’s general audience address on Wednesday, July 8 , during which the pontiff publicly commented on his landmark social encyclical “Caritas in Veritate” the day after it was officially released by the Vatican. Below is a summary of Benedict’s address to visitors in Rome, including Lewis’s own translation.

Yesterday, the Vatican released Pope Benedict’s third encyclical, “Caritas in veritate,” along with an official summary of the 144-page document that has six chapters and a conclusion. In addition, there was a very worthwhile two-hour press conference with summaries of the document’s salient points, as well as a Q&A session between reporters and Cardinals Martino and Cordes, Archbishop Crepaldi and Prof. Stefano Zampagni.

But surely the best summary of Pope Benedict’s just-released encyclical is the one he himself gave at today’s general audience, held in the Paul VI Hall and highlighting the moral criteria that must underpin economic choices.

In only 1,300 words (the encyclical has 30,466), the Pope explained the document’s contents and his intention in writing it. He began by explaining that Caritas in veritate was inspired by a passage from Paul’s Letter to the Ephesians where “the Apostle speaks of acting according to the truth in love: ‘Rather, living the truth in love, we should grow in every way into him who is the head, Christ’.” Thus, said Benedict, “charity in truth is the principal driving force behind the authentic development of every person and of all humanity. For this reason, the entire social doctrine of the Church revolves around the principle ‘Caritas in veritate’. Only with charity, illuminated by reason and by faith, is it possible to pursue development goals that possess more human and humanizing values.”

“The encyclical,” the Pope adds, “immediately calls our attention in the Introduction to two fundamental criteria: justice and the common good. Justice is an integral part of that love ‘with deeds and in truth’ to which the Apostle John exhorts us. And ‘to love someone is to desire that person’s good and to take effective steps to secure it. Next to the individual good there is a good linked to the social life of the person. We love our neighbor all the more efficaciously, the more we apply ourselves to working for the common good. Therefore, there are two operating principles, justice and the common good. It is thanks to the common good that charity acquires a social dimension. Every Christian – he quotes from the encyclical – is called to practice this charity – this is the institutional path… of charity.”

“As do other documents of the Magisterium,” said the Holy Father, “this encyclical intensifies Church analysis and reflection on social themes of vital interest to humankind in our century. In a special way it harks back to what Paul VI wrote more than forty years ago in his ‘Populorum progressio’,” the cornerstone of the Church’s social teaching, in which this great Pontiff traces several decisive – and ever current – lines for the integral development of man and the modern world.”

“The world situation, as events of recent months amply demonstrate, continues to present no small problems. And the ‘scandal’ of startling inequalities which remain notwithstanding past commitments. On the one hand, signs of serious social and economic imbalances can be seen; on the other, there are many sides calling for reforms that can no longer be put off to fill the divide in the development of peoples. To this end, the phenomenon of globalization can constitute a real opportunity, but for this to happen it is important that there be a profound moral and cultural renewal and a responsible discernment about the choices made to achieve the common good. A better future is possible for everyone if it is based on the rediscovery of basic ethical values. That is to say, new economic planning is needed that redesigns development in a global way, basing it on the ethical foundation of responsibility before God and on being human as a creature of God.”

“Caritas in veritate,” said Benedict XVI, “does not seek to offer technical solutions to the enormous social problems of the modern world – this is not up to the Church’s Magisterium. What it does do is recall the fundamental principles that are indispensable for building human development over coming years.” Among these principles it highlights “concern for the life of man, seen as the center of all true progress; respect for the right to religious freedom, always strictly linked to man’s development, and the rejection of a Promethean vision of human beings which sees them as the sole architects of their own destiny.”

“Unlimited trust in the potential of technologies would also show itself, in the end, to be illusory. Upright men and women are needed in politics as well as economics, people sincerely attentive to the common good. In particular, in looking at he world’s emergencies, it is urgent to focus attention of public opinion on the drama of hunger and food security which touches upon a considerable part of humanity. A drama of such dimension involves our consciences: it is necessary to face it decisively, eliminating the structural causes that produce it and promoting the agricultural development of the poorest countries.

“I am certain,” said Benedict, “that the path of solidarity with the poorest countries will help to work out a project to solve the global crisis underway. Without doubt there must also be a re-evaluation of the role and political power of States, in an era in which exist de facto limitations to their sovereignty because of the new international economic-commercial and financial contexts. And on the other hand, there must be the responsible participation of citizens in national and international politics, thanks to a renewed commitment by workers’ associations called to create new synergies at the local and international levels. In this field, the means of social communication are also in the forefront in order to strengthen the dialogue between diverse cultures and traditions.”

The Pope continues: “Wishing therefore to plan a development that is not spoiled by the dysfunctions and distortions so amply present today, everyone must seriously reflect on the very meaning of the economy and its scope. The ecological health of the planet demands this; the cultural and moral crisis of the man emerging with evidence in every part of the world demands it. The economy needs ethics to function correctly. It needs to recover the important contribution of the principle of gratuitousness and the ‘logic of giving’ in the economy and in the market, where profit cannot be the only rule. But this is possible only through commitment on the part of everyone – economists and politicians, producers and consumers – and it presupposes a formation of consciences capable of strengthening moral criteria in the elaboration of political and economic projects.”

“There is also the fact – as many sides remind us – that rights presuppose corresponding duties, without which rights risk being transformed arbitrarily. There is need for all humankind to practice a different lifestyle, one in which each individual’s duties towards the environment are linked to his or her duties towards human beings, considered both in themselves and in relation to others. Humanity is one family, and a fruitful dialogue between faith and reason can only enrich it, making more efficacious the work of charity in society, and constituting the appropriate frame for incentives for collaboration between believers and non–believers in the shared perspective of working for justice and peace in the world.

“As a criteria-guide for this fraternal interaction, in the encyclical I indicated the principles of solidarity and subsidiarity, closely linked to each other. Faced with the vast and profound problems of today’s world, I indicated the need for a world political authority regulated by law, one that observes the principles of subsidiarity and solidarity and is firmly directed towards attaining the common good, while respecting the great moral and religious traditions of humanity.”

“The Gospel reminds us,” said Pope Benedict in conclusion, “that man does not live by bread alone. It is not material goods that will satisfy the deep thirst of his heart. Man’s horizon is doubtlessly higher and more vast: and for this, every program of development must take into account, next to material growth, the spiritual growth of the human person, who is endowed with body and soul. This is the integral development to which the Church’s social doctrine constantly refers. A development that has its guiding criterion in the propulsive strength of ‘charity in truth’.”

“Pray, brothers and sisters, that this Encyclical may help humankind to feel itself to be a single family, committed to creating a world of justice and peace. Pray that believers, who work in the fields of the economy and politics, may feel how important their coherent Gospel witness is in the service they perform for society. In particular, I ask you to pray for the heads of State and government of the G8 who are currently meeting in L’Aquila, Italy. May this important world summit generate decisions and directives that serve the true progress of all peoples, especially the poorest.”

In his summary in English of his longer catechesis in Italian, the Pope said;

“Today I wish to reflect on my Encyclical, Caritas in Veritate. Some forty years after Pope Paul VI’s Encyclical Populorum Progressio, it too addresses social themes vital to the well-being of humanity and reminds us that authentic renewal of both individuals and society requires living by Christ’s truth in love (cf. Eph 4:15) which stands at the heart of the Church’s social teaching. The Encyclical does not aim to provide technical solutions to today’s social problems but instead focuses on the principles indispensable for human development. Most important among these is human life itself, the center of all true progress. Additionally, it speaks of the right to religious freedom as a part of human development, it warns against unbounded hope in technology alone, and it underlines the need for upright men and women – attentive to the common good – in both politics and the business world. In regard to matters of particular urgency affecting the word today, the Encyclical addresses a wide range of issues and calls for decisive action to promote food security and agricultural development, as well as respect for the environment and for the rule of law. Stressed is the need for politicians, economists, producers and consumers alike ensure that ethics shape economics so that profit alone does not regulate the world of business. Dear friends: humanity is a single family where every development program – if it is to be integral – must consider the spiritual growth of human persons and the driving force of charity in truth. Let us pray for all those who serve in politics and the management of economies, and in particular let us pray for the Heads of State gathering in Italy for the G8 summit. May their decisions promote true development especially for the world’s poor. Thank you.”