I wrote several blogs last week about the value and importance of the Church Fathers. One of the early Greek Fathers was Clement of Alexandria, born in Athens around A.D. 150. His parents were pagans. He was converted to faith in Christ and began to travel widely searching for faithful Christian teachers. He attended the famous School of Theology in Alexandria, founded by Pantaenus in A.D. 180. After he settled there he became the director of the school, thus Clement of Alexandria. A few years after he became the director he was forced to quickly flee during the persecution of Septimius Severus. He took refuge in Cappadocia, where he died in A.D. 215, thus he is called a Cappadocian Father. 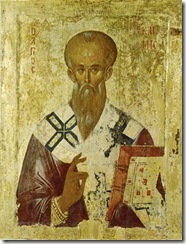 St. Clement is considered one of the forerunners of what we now call systematic theology. He was the first Christian writer to recognize secular philosophy (Neoplatonism) and incorporate some of its major ideas in service of the Christian faith. Most of his literary output has been lost but one work, on riches and wealth, is still considered valuable to the church. Commenting on Mark 10:17-22 Clement addressed some of the common interpretations of this text by saying:

1. Our Lord was not telling Christians to get rid of their wealth. He was telling them to banish from their souls the primacy of riches. “Unfettered greed can suffocate the seed of true life.”

2. It is not something new to renounce riches and distribute them to the poor. This, said Clement, was done long before Jesus came. Some did this to devote themselves to the arts and in search of vain knowledge while others sought fame and glory by this means.

3. What our Lord does command here is something new, something proper to God who alone gives life. Clement writes:

He does not command what the letter says and what others have already done. He is asking for something greater, more divine, more perfect than that which is stated –that we denude the soul itself of its disordered passions, that we pull out the roots and fling away what is foreign to the spirit. Here, then, is the teaching proper to a believer, and the doctrine worthy of the Savior. Those, who before Christ’s coming despised material goods, certainly gave up their riches and lost them, but the passions of the soul increased even more. For having believed that they had done something superhuman, they came to indulge in pride, petulance, vainglory, despising others.

Clement wrote that a person could give everything away only to doubly regret his decision. To teach that Jesus intends for every disciple to give up everything contradicts statements like those of Luke 16:9, which urges us to make friends by the use of wealth. “Riches then should not be rejected if they can be of use to our neighbor. They are accurately called possessions because they are possessed by people, and goods or utilities because with them one can do good and because they have been ordained by God for the use of men.”

What Clement is saying is that goods and possessions can be instruments in the hands of skilled servants who use them to bless others and advance great good. “Riches, then, are also an instrument.” If rightly used they can bring about justice and service. He added, “In themselves riches are blameless.”

So what is the problem with riches? Riches present an opportunity to do great good or serious evil. “The one to be accused is the person who has the ability, through the choice he makes, to put it to good use or to misuse it. And this is up to the mind and judgment of man, who is free and able to manage what is given him for his use.” Simply put, we are required to be good stewards of all goods and possessions we have been given by whatever means.

So the problem riches present to us, concludes Clement, is in how they are used by our disordered passions. “The rich – who are going to find it difficult to enter the kingdom – will have to understand these words intelligently, and not in a dull and superficial way.”

My experience with people who possess great means is that this is an accurate understanding of the true problem. The real problem is not in riches themselves but in human passions and desires. Wealthy people can bring immense blessing to people and mission. Make no mistake about this, prosperity is always to be preferred to poverty. But those who prosper must understand that they bear greater responsibility to deal with their passions and desires and to use their possessions and goods for the kingdom of God.

John H. Armstrong is founder and director of ACT 3, a ministry aimed at "encouraging the church, through its leadership, to pursue doctrinal and ethical reformation and to foster spiritual awakening."