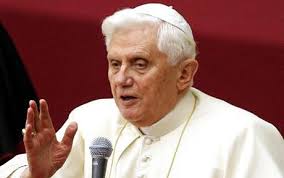 Pope Benedict XVI delivered inspiring remarks at the European Year of Volunteering (EYV) summit held in Rome this past Nov. 10-11. He explained why gratuitous giving of personal talent and resources is so important in restoring a healthy vocational perspective to everyday business.

As Benedict knows all too well, a culture of Christian charitable giving is not at its height in Ol’ Europe, where the modern Welfare State and Keynesian economics have played such a dominant role the past 70 years (see why in Michael Miller’s 2008 Acton lecture The Victory of Socialism and the strong opinion of other Roman pontiffs in my blog Popes Say No to Socialism). European government dominance of charitable enterprise has reduced much of the Continent’s generosity in terms of private giving and volunteer activities.

A pervasive “every man for himself” mentality is now infecting the hearts of European workers and households struggling to stay afloat. From their perspective, who can really blame them? Many wonder: Who has the money or the time to care for others when you and your family are just barely surviving?

During the EYV summit, the Holy Father commended leaders from European charitable non-profits and volunteer organizations for keeping a culture of generosity and self-giving alive. Benedict underscored the absolutely essential role their work plays in building up a society of free giving and virtue (altruism, generosity and selflessness) and restoring confidence in man’s innately good heart, now withered and tested by the intense pressures of today’s down market. These latter socially destructive tendencies are the ones the Acton Insitute attempts to thwart in its program for effective charity, The Samaritan Award and Guide.

European charitable enterprise leaders, so to speak, help create a “market of gratuitousness”, as mentioned in Benedict’s social encyclical Caritas in Veritate (Charity in Truth). This same abundance philosophy is argued so convincingly in Arthur C. Brooks’s Gross National Happiness (see book with Brooks’s research on wealth and charitable giving). The president of the American Enterprise Institute writes that charitable giving of time and resources makes us psychologically happier and more humanly fulfilled, which in turn increases our chances of being more happy and productive in the workplace, which consequently influence growth trends in corporations and entire commercial sectors.

This is the positive circle of growth and happiness that charity helps inspire. It is the exact reason why volunteer activity ends up paying real dividends in commercial enterprise, as business people flourish morally and spiritually. To understand further, watch Arthur Brooks’s Fox News interview regarding economic growth factors linked to generosity and happiness in the United States and with some heavy criticism of giant Welfare States like France, a country ranked a miserable 91 out of 153 nations surveyed for the latest Index (download 2010 PDF report and index). According to the Index, some of the most enterprising European countries (like Great Britain, Ireland, Switzerland, Germany and Holland), while battling the same destructive welfare culture and economic crises, all made the top 20 with the traditionally high-ranking United States (no. 5). By contrast, the same welfare dependent, economically troubled but far less enterprising Greece was ranked dead last in the Eurozone and in the bottom five of all 153 countries represented.

The opposite destructive vicious circle goes something like this: stinginess of heart leads to a lack of deep vocational interest in work and therefore a miserly contribution of one’s talent and resources, which directly lowers overall production and profits for enterprise, as worker pessimism and selfishness help undermine commercial potential. This is one good reason why markets stagnate, retract and eventually die when such negativity and selfishness swirl violently into a cultural vortex, sucking down an entire nation’s true economic potential.

We are not surprised to hear Pope telling EYV participants that volunteer work and charity “is not merely an expression of good will.” As he articulated this great teaching:

At the present time, marked as it is by crisis and uncertainty, your commitment is a reason for confidence, since it shows that goodness exists and that it is growing in our midst. The faith of all Catholics is surely strengthened when they see the good that is being done in the name of Christ… His grace perfects, strengthens and elevates that vocation and enables us to serve others without reward, satisfaction or any recompense. Here we see something of the grandeur of our human calling: to serve others with the same freedom and generosity which characterizes God himself.

A day later, during his Nov. 13 Sunday Angelus, the Pope reflected on giving and investment of human talent and resources in the context of Sunday’s gospel (Parable of the Talents: Matthew 25:14-30). As Acton’s President Rev. Robert Sirico argues in his monograph The Entrepreneurial Vocation, Benedict XVI invited faithful to respond thankfully and generously to their individual gifts for the advancement of God’s abundance on Earth:

In today’s Gospel…Jesus invites us to reflect with gratitude on the gifts we have received and to use them wisely for the growth of God’s Kingdom. May his words summon us to an ever deeper conversion of mind and heart, and a more effective solidarity n the service of all our brothers and sisters.

We are in the midst of an economic crisis afflicting the whole of Europe, and raising tensions, worries and anxieties throughout the world. It is a crisis that challenges the intellects and abilities of politicians and economists. In the midst of this crisis, the Pope’s speech to the young people gathered in Rome for the European Year of [Volunteering] may provide a modest contribution to help rediscover a common hope. The Pope asks us to keep in mind the idea of ‘gratuitousness’, of giving freely —that is, not living solely for one’s own interests, but living in such a way that we are a gift to others.

The generous and routine volunteering of one’s talent and resources instills everyday habits that market-based economies need and rely on for individual entrepreneurs and businesses to grow and succeed. It’s what makes or breaks businesses teetering on the edge of failure, when employees and professional collaborators give a little more of themselves to help enterprise lunge forward.

Apart from emboldening private initiatives to diminish the role of  European Welfare States and increasing our Gross National Happiness, the real output of charity is measured in the increased hearts and souls of generous, selfless business people. It is these same business people who take the gratuitousness they learned in habitual acts of charity and apply this virtue to generous forms of service with “other-directed” collaboration, products and services.