In this week’s Acton Commentary, “Ministers of Common Grace,” I note that in addition to ministry, “Another scriptural term, that of stewardship, can helpfully describe the pluriformity of God’s grace, both special and common: ‘Each of you should use whatever gift you have received to serve others, as faithful stewards of God’s grace in its various forms’ (1 Peter 4:10 NIV).” I conclude by calling for “better attention to the overlap and varieties of these biblical terms.”

What I have primarily in mind is the way in which Scripture seems to use concepts like ministry, service, and stewardship somewhat interchangeably. This is undoubtedly true in the case of translations into English. As I noted in the commentary, the NIV and the ESV read Romans 14:6 alternatively as “servants” or “ministers.” 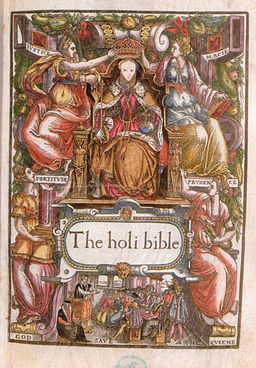 And in sixteenth century editions of the Bible, the ministerial terminology was often preferred to that of stewardship, as in the NIV of today. For instance, in the Bishops’ Bible, 1 Peter 4:10 reads, “As euery man hath receaued the gyft, eue so minister the same one to another, as good ministers of the manifold grace of God.” Likewise the Geneva Bible renders the verse this way: “Let euery man as hee hath receiued the gift, minister the same one to another, as good disposers of the manifolde grace of God.”

It’s in Coverdale’s translation (“& mynister one to another, eueryone with the gifte yt he hath receaued, as good stewardes of the manifolde grace of God.”) and the Catholic Douay-Rheims bibles (“As every man hath received grace, ministering the same one to another: as good stewards of the manifold grace of God.”) that we find stewardship and ministry connected explicitly, and this follows through in the KJV text tradition.

It’s interesting to note that one of the updates to the NIV since the 1984 edition has been the integration of this stewardship terminology. The 1984 edition emphasizes the idea of service, “Each one should use whatever gift he has received to serve others, faithfully administering God’s grace in its various forms,” while the latest update I quoted in the commentary reads, “Each of you should use whatever gift you have received to serve others, as faithful stewards of God’s grace in its various forms.”

The relevant terms at play in the Greek here are words based on the roots διακονέω (“to serve”) and οἰκονόμος (“a manager of a household”; a steward). As Martin Luther reflects on the impact of this dynamic of ministry, service, and stewardship, he writes:

The Gospel wants everyone to be the other person’s servant and, in addition, to see that he remains in the gift which he has received, which God has given him, that is, in the position to which he has been called. God does not want a master to serve his servant, the maid to be a lady, a prince to serve the beggar. For He does not want to destroy the government. But the apostle means that one person should serve the other person spiritually from the heart. Even if you are in a high position and a great lord, yet you should employ your power for the purpose of serving your neighbor with it. Thus everyone should regard himself as a servant. Then the master can surely remain a master and yet not consider himself better than the servant. Thus he would also be glad to be a servant if this were God’s will. The same thing applies to other stations in life.

God did not give us all equal grace. Therefore everyone should pay attention to his qualifications, to the kind of gift given to him. (LW 30:124)

The Puritan William Ames draws out three reasons and two uses of the doctrine gathered from 1 Peter 4:10 (pp. 98-99): “It is an office of charity to minister unto others the gifts which we have received, of what kinde soever they be.”