Just in case you were thinking that the rabid anti-human elements of environmental movements had dissipated, take a look at the newest exhibit at the London Zoo.

Titled “The Human Zoo,” the exhibit features 8 people living in “natural” conditions over the course of three days, and is “intended to show the basic nature of human beings,” that is, our inherent animalism. 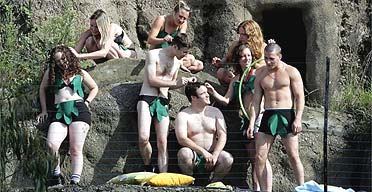 In the words of a London Zoo spokesman, “We have set up this exhibit to highlight the spread of man as a plague species and to communicate the importance of man’s place in the planet’s ecosystem.” One commentator notes, “We may be watching evolution in action.”

There are a number of important issues here. The first is the linkage of the view of humans as a “plague species” with the myth of unsustainability of the population explosion. This anti-human perspective is manifested in any number of policies and programs around the world, including PETA and things like the UN’s World Population Day. Now the London Zoo is joining the fray. For a literary movement embodying this position, go here.

Of course, another questions you have to wonder about is why an “ethic” based on a Darwinian philosophy of natural selection should be concerned about a “plague species.” Isn’t it just survival of the fittest?

This soft sentimentality and romanticism of the environmental movement isn’t based on philosophical rationality, of course. If we really are no different than animals, why should our behavior be held to a higher standard? The position is fundamentally self-defeating.

The only perspective that accounts for all of the complex realities of human existence and the rest of creation is one normed by the Bible. The creation accounts, along with the dominion and stewardship mandates, of Genesis 1 and 2 describe both the continuities and discontinuities between humans and the rest of the animal world and our resulting responsibilities.

The fall into sin gives us a basis for understanding how and why humans do negatively impact the world and fracture the created relationships. But the history of redemption gives us hope for a consummated new heaven and new earth…a hope that cannot be approached from a merely naturalistic worldview. It also gives us a reason to be concerned about stewardship of the world (rightly construed).