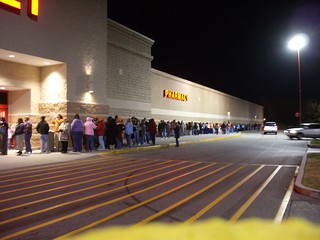 The estimable Mollie Hemingway has a post up at Ricochet that examines the curious spillover of Black Friday into Thanksgiving Thursday. She writes, “Do Target executives have the right to make employees leave their families to open stores on days when they’ll be home with their families? Of course they do. Should they? Of course not!” Her concern is “that some people are so addicted to shopping that they can’t even take three days off a year.” I think she’s right to conclude that “if you are in any way inclined to shop on Thanksgiving instead of waiting a day for your fix, consider seeking help.”

About this time last year I wrote a piece on this phenomenon, in which I argued that consumers ought to realize the implications of their spending choices: “A variety of polls have shown that the public generally thinks that stores should be closed on Thanksgiving, but they may not always recognize what their shopping habits require of retailers. Shoppers need to realize that they cannot have it both ways. Our decisions have real consequences for the lives of those who work in retail and a host of other industries.”

Some advocates for the market economy will demur, and claim that any attempt to limit market activity is inherently problematic. But I would contend that the idea that economic activity has primary claim over all of life, over all of our time, 24/7/365, is analogous to the collectivist error which holds that any part of our income that is not taxed is untapped revenue for the government and left in the private possession only by governmental largesse. Both errors absolutize the claims of one aspect of our lives, whether economic or political.

Hemingway makes an important corollary point in the comments, when she writes, “I wish more people could separate out whether something should be restricted by the government and whether it should be done.” The claim that there are moral limits on market activity is not identical to claiming that there ought to be legal restrictions, a point classically formulated in Aquinas’ principle of prudence.

Many will choose to camp out on Thursday evening in hopes of getting a good deal. Others will trample their fellow human beings in a discount-inspired frenzy. But as for me and my house, we’ll be staying home on Thanksgiving Thursday (and sleeping in on Black Friday).

I reserve the right to run out to the grocery store early tomorrow if we have forgotten cranberry sauce, however.