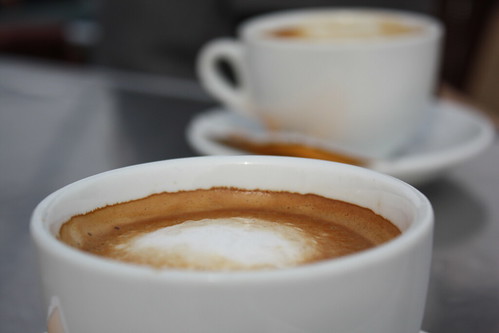 “Who could be against fairness?” Victor Claar asked this question at Acton University last month. He and Travis Hester gave a talk titled, “Fair Trade Versus Free Trade” with their focus on the coffee industry. They explained what the fair trade movement is, evaluated its effectiveness, and explored ways for caring people to help coffee growers overcome poverty.

Before looking at the fair trade movement, it is important to note that coffee is what economists call an inelastic good. That means that if the price of coffee increases, the quantity demanded will not decrease by a lot. Claar puts it simply: “If coffee prices rise, coffee drinkers will probably buy less coffee, but probably not much less.” Spikes occur frequently in coffee prices due to bad weather and the delicacy of Arabica coffee plants. The price of coffee is volatile and is, according to fair trade advocates, too low.

The fair trade movement began in the mid 20th century and was intended “to improve the lot of the global poor.” Fairtrade International (Formerly known as the Fairtrade Labelling Organization-FLO) sets forth the requirements and certifies growers and goods. FLO oversees the fair trade market of many different goods. Coffee is one of the most common fair trade goods, but it is not the only one. FLO defines “fair trade” as:

[A]n alternative approach to conventional trade and is based on a partnership between producers and consumers. Fairtrade offers producers a better deal and improved terms of trade. This allows them the opportunity to improve their lives and plan for their future. Fairtrade offers consumers a powerful way to reduce poverty through their every day shopping.

Does the fair trade movement work? Unfortunately, there are a plethora of problems with it. In general, while the demand of coffee is inelastic, the supply is elastic. The artificially high price, set by FLO and other fair grade organizations, greatly increases the quantity supplied by incentivizing individuals, who would normally pursue other endeavors, to enter the coffee industry as growers and by incentivizing current coffee suppliers to grow more. This excess of coffee and coffee growers makes everyone in the industry poorer. Growers will produce more coffee than consumers want. Coffee growers that are not fair trade certified become significantly poorer because they will have to charge a much lower price for their coffee than they would in a truly free market.  Claar goes on to explain that the consumer also suffers, but not just because he or she is paying more for a morning brew. Fair trade coffee growers have little to no incentive to grow the best crop as they are guaranteed the highest prices no matter what. In some cases, fair trade growers have been known to sell lower quality crops in the fair trade market and then sell higher quality coffee beans in the non-fair trade market for a competitive price. A guaranteed price means that growers do not have to guarantee quality.

Another significant problem with the fair trade movement is the regulation against child labor. This rule may ultimately hurt children. According to Hester, the school year in Honduras is built around the coffee picking season. Families pick coffee together all contributing to the family’s income. Children are not allowed to work under fair trade rules, so if adults own a fair trade farm, their children will look for work down the road at another non fair trade coffee farm. Thus, they will no longer with their parents or older siblings, but will be working on their own. In effect, child labor is not eliminated it is simply displaced.

The well intentioned fair trade movement places coffee growers in “golden handcuffs.” The incentive of slightly higher prices encourages growers to stay in that industry when they might otherwise pursue more productive endeavors. Claar and Hester both pointed out during their presentation at Acton University that “you will never have a middle class lifestyle growing coffee.” Claar also warns that:

The moral shortcomings of the fair trade movement is that it keeps the poor shackled to activities that, while productive, will never lead to poverty reduction on a large scale—or even a modest one. Further, if our purchases of fair trade really do retard the long-term rate of poverty reduction, then buying fair trade might be viewed as causing harm.

In the end, Claar cautions, the fair trade movement is a marketing scheme. When you pay extra for a cup of fair trade coffee, you’re paying to look like a caring person or feel like a caring person, but you’re not necessarily helping coffee growers. Spending more money on a cup of fair trade coffee is seen as an act of social responsibility. Basically, the organizations leading the movement are attempting to bundle charity or social justice with coffee.

What about the free market? It offers valuable information through prices. The low price of coffee is a sign to producers to stop producing so much. Without these valuable tools to connect buyer and seller, there is abundance of unwanted crop and producers are wasting valuable resources on something unproductive. Technology has been an invaluable tool in the coffee growing industry thanks to the advances of the free market. Coffee growers can check the price of coffee on the commodity exchange and can evaluate an appropriate price to charge for their crop, using their cell phones.

How might a caring person respond? Some have suggested that the best way to help coffee growers is by ordering coffee directly from the growers so they receive all of the profit. Unfortunately, this may reduce coffee’s quality and taste. People who have tried coffee sold directly by growers say that is significantly more bitter and tastes very little like coffee. However, at least one group has figured out how to do this successfully.

Madcap Coffee in Grand Rapids, Mich. imports the raw coffee beans and roasts them in house. A representative from Madcap has personally visited 75 percent of the farmers who provide their raw beans. While Madcap is not “fair trade” certified, nor do they only work with fair trade growers, they seem to be moving in the right direction to help coffee growers. Madcap owner and founder Ryan Knapp gave an unpublished interview to PovertyCure and explained why he decided to avoid the fair trade certification: “We have been intentional on the fact that we are not going to have a label to say what our coffee is as much as we are going to be a brand that is committed to great business practices.” He goes on, “Fair trade, a certification doesn’t really tell the whole story…Fair Trade isn’t the best option always for producers.” What is the best option for producers? According to Knapp, “the big piece of it is the transparency aspect and knowing exactly where our dollar is going and being able to trace that down to people that are actually growing the coffee, farming the coffee.” This is one solution to helping poverty-stricken coffee growers outside of the fair trade movement.

Instead of paying a premium to fair trade coffee that does not help coffee growers and may in fact harm them, Claar and Hester suggest that caring consumers should donate that extra cost of fair trade coffee to a microfinancing organization or invest it in more holistic and valuable ventures.

The issue of fair trade versus free trade is a vast one and this post barely begins to scratch the surface. To learn more about it, you can download Claar’s presentation from Acton University 2012 or you can read his book, Fair Trade? Its Prospects as a Poverty Solution. Although the fair trade movement is essentially a marketing scheme that possibly does more harm than good, it came from good intentions. There is dignity is almost all types of work and some people are called to spend their lives in the coffee growing industry. As Christians, we should not despair, but innovate and hope. Certainly enjoy your next cup of coffee!