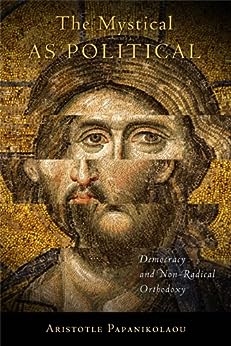 In the most recent issue of the Journal of Markets & Morality (16.1), I review The Mystical as Political by Aristotle Papanikolaou. I write,

In The Mystical as Political, Aristotle Papanikolaou seeks to construct a political theology rooted in the Orthodox Christian conviction that all of creation, and humanity in particular, was created for communion with God. He begins by offering a helpful survey of political theory in the Orthodox tradition, focusing especially on Eusebius of Caesarea, Saint John Chrysostom, the Emperor Justinian, Vladimir Soloviev, and Sergius Bulgakov, inter alia (chapter 1). In the following chapters, he addresses the relationship between church and state (chapter 2); personhood and human rights (chapter 3); divine-human communion and the common good (chapter 4); and honesty, forgiveness, and free speech (chapter 5). In the process, and refreshingly for an Orthodox writer, he also engages Western theologians and philosophers — including William Cavanaugh, Jacques Maritain, Stanley Hauerwas, and Nicholas Wolterstorff, to highlight only some of the more prominently featured — acknowledging their genuine insights while, nevertheless, criticizing what he sees to be various shortcomings. The Mystical as Political represents a careful and irenic, though not uncritical, Orthodox Christian approach to political theology, ultimately offering a positive appraisal of liberal democracy and human rights. Although essential reading on the subject with much to commend it, it has several shortcomings of its own.

In particular, I hone in on “an overemphasis on the particular over against the general, the dynamic and the uniqueness of persons over against the static and the common nature of humanity.” As this is a continuing interest of mine and a subject I have explored in the past here on the PowerBlog, as well as elsewhere, my review is offered as open access to anyone who may be interested in the subject here.

I previously explored the subject of Orthodoxy and natural law here.

And Fr. Michael Butler lectured on the subject of “Orthodoxy and Natural Law” and “Orthodoxy, Church, and State” at Acton University this summer, my summaries of which can be found here and here.