“Mockingjay, Part 1,” the first film installment of the finale to Suzanne Collins’ massively popular young adult trilogy, The Hunger Games, has dominated the box office in its opening week and over the Thanksgiving weekend. As Brooks Barnes reported for the New York Times, “The No. 1 movie in North America was again ‘The Hunger Games: Mockingjay Part 1,’ which took in an estimated $56.9 million from Friday to Sunday, according to Rentrak, a box-office tracking firm. Domestic ticket sales for ‘Mockingjay’ now total a hefty $225.7 million….”

While some would criticize the series for lack of depth, “Mockingjay, Part 1,” offers more than just a shallow cast of good guys vs. bad guys, acting as a window into the messy realities of tyranny, class, and freedom.

The Hunger Games books and films have generated some controversy, as Kenneth R. Morefield noted in Christianity Today, “Would it surprise you to learn that Suzanne Collins’ Hunger Games trilogy has been one of the ten most frequently challenged or banned books in schools and libraries for three of the last four years?” But Morefield isn’t convinced such worries are warranted: “did you know my thesaurus lists sixteen synonyms for ‘innocuous’?”

He goes on, however, to add his own assessment of the franchise’s artistic merit:

You can make some legitimate artistic criticisms of The Hunger Games. But when you get right down to it, those criticisms basically boil down to the fact that it isn’t highbrow.

Well, neither was Star Wars, the franchise The Hunger Games most resembles. Both are about rebellions against a non-descript political tyranny. Both are driven by love triangles that ground the epic stakes in human emotions. Both boast better actors than we’re used to seeing in these kinds of movies. Both sparingly but effectively use villains who scare us because of just how much they terrify our heroes. Mostly, though, both are thinly plotted serials that serve as an excuse for linking together battles, escapes, rescues, and romance.

I should be clear that Morefield does not really consider this a fault, recommending the film as a conversation starter for connecting with the young adults in one’s life enthralled with Collins’ fiction. I would second that. Yet — and perhaps this is only a small quibble — I would not describe the films and books as “thinly plotted serials.” (I have my own criticisms, but they fall more on “Part 2.”)

Morefield’s contention seems to be that the compelling elements of “Mockingjay” ultimately exist for the aesthetic of violence, suspense, sexual tension, and adventure. I would rather contend the opposite. The “battles, escapes, rescues, and romance” serve the deeper themes by bringing them down from ivory tower abstraction into an extreme and complicated existential reality. To use Morefield’s example of Star Wars, one could argue this is precisely the difference between the original trilogy and the more recent prequels: for the former the action served grander themes; for the latter all semblance of depth was sacrificed for bells and whistles. 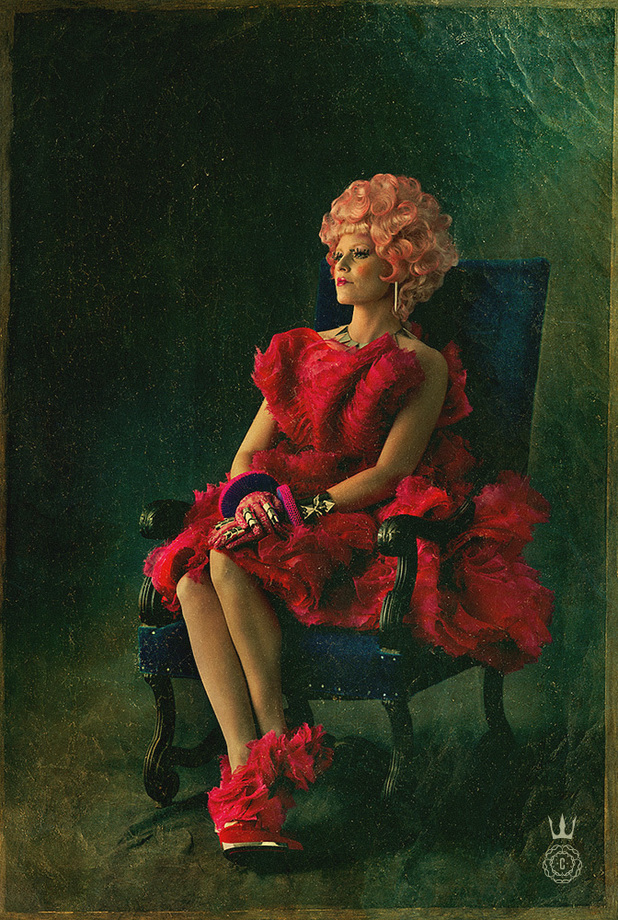 Consider the themes of tyranny and class dynamics in The Hunger Games, a subject that I reflected on last year with reference to “Catching Fire.” In “Mockingjay,” which like past films in the series does an excellent job of bringing these themes more to the forefront than their source material, we see again a clear rejection of “us vs. them,” class warfare dynamics in favor of greater nuance and complexity.

Which brings me to Effie Trinket (played by Elizabeth Banks). Effie epitomizes the shallow lifestyles of Capitol denizens. Her audacious cosmetics, fabulous hairstyles, and loudly colored wardrobe represent a clearly disordered love in her life. She buys into the drama of the Hunger Games like everyone else, seeming to mourn more that she would lose one of her few victors to fawn over in the Quarter Quell in “Catching Fire” than that one of them, in fact, would lose life itself.

Yet despite her shallow exterior and admittedly unspectacular intellect, there is more to Effie than meets the eye — encapsulating the fact that there is more to The Hunger Games than aesthetics as well. Sure, she’s bad at caring for the citizens of the districts, but she’s good at trying. She does her best to show solidarity with Katniss (Jennifer Lawrence), Peeta (Josh Hutcherson), and Haymitch (Woody Harrelson) by giving them all gold trinkets (pun intended?) to wear together before the Quarter Quell.

In “Mockingjay,” she first appears when former gamemaker Plutarch Heavensbee (Philip Seymour Hoffman — memoria aeternitatis) enters her room in District 13 to ask her to help prep Katniss for the propaganda videos they intend to film to rally support throughout Panem. She refers to her room as her “cell,” though Plutarch reminds her she is not, in fact, a prisoner. Yet, as she puts it, she has been “condemned to this life of jumpsuits” — skewering the conformist dress of the militaristic District 13. All shallow, right?

As the conversation continues, another side of Effie comes to the fore. Plutarch scolds her that the revolution is happening and there is no going back to the extravagant life she once had, calling her, “replaceable,” just like everyone else. But Effie counters that certainly Katniss, who the rebellion so wants to be their mockingjay, is not replaceable, and neither is she. Her self-worth may be inflated, but she also hints at the error of Plutarch’s way of thinking: no person is replaceable, an inherent dignity violated year after year by the Hunger Games themselves.

And, in fact, it is precisely for her supposed shallowness that Plutarch wants her help. As it turns out, fashion does matter — perhaps not as much as Effie thinks it does, but certainly more so than District 13 acknowledges. As Elizabeth Banks, commenting on her character, put it,

I think beauty has moved nations; I mean — it moved Odysseus to cross the oceans. Beauty is very important; it is very inspiring…. It’s human nature to respond, I think, to beauty. And also, self-adornment has been with us … forever and ever, throughout time, and so — these are things that Effie believes in, and I don’t think they’re frivolous, and I don’t think they’re superficial. I think they actually matter.

I doubt fashion is quite what Dostoevsky meant by his claim, “Beauty will save the world,” but nevertheless Banks is onto something here. In the film Effie is merged with another character, Fulvia Cardew, Plutarch’s right hand adviser. Thus, while not absent in the book, in the film her development becomes far more prominent with added lines that, to me, were some of the movie’s best. She may not have been a double agent like Plutarch, but she is not a faceless drop in the shallow sea of the Capitol; she has her own gifts to offer — her fashion sense in particular — even if only reluctantly.

Commenting on France under Napoleon III, Lord Acton once said, “The victims of the imperial despotism are for the most part its instruments.” Panem has far more victims than the willing instruments of the Capitol, but nevertheless “Mockingjay” shows that even the Effies of the world, the symbols of self-serving tyranny, may themselves be tyrannized and worthy, too, of liberation. If we can look more than skin deep (passed, no doubt, copious layers of concealer), we might see even those we believe to be shallow or adversarial to possess the irreplaceable dignity of the image of God.

This is just one achievement of “Mockingjay,” and one of many great reasons to go see the film.