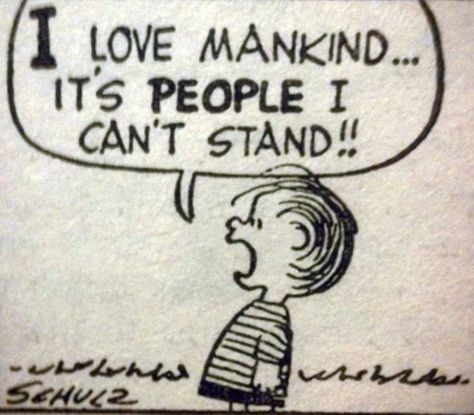 It is commonplace in Christian circles, whether Orthodox, Roman Catholic, or Protestant, to appeal in public discourse to the inviolable good of human dignity.

Today at Ethika Politika, I seek to answer the question, “What does human dignity look like in real life?” It is fine to talk about it in the abstract, but what does it look like on the job or as a parent?

Real, flesh-and-blood human persons do not evoke our respect as naturally as an abstract treatise on human dignity might imply. I am reminded of one Peanuts comic in which Linus shouts, “I love mankind … it’s people I can’t stand!” People, as a general rule, all tend toward some form of nerdery, some weird little obsession — such as sports, video games, philosophy, music, or literature — or at least some personal (usually minor) neurosis, like an aversion to a certain smell or fear of spiders or always having to have the last word.

And, frankly, Linus is right, even if he overstates his case. It is a common if not essential feature of personhood that any given person, with enough exposure, will grow annoying to our unsanctified hearts.

The challenge of respecting the human dignity of all people is just as much about learning to do so in the midst of day-to-day annoyances and neuroses — if not more so — than it is about having all the right philosophy or legality to protect it. There are limits to the law, and a philosophy unlived is itself at best just another nerdy hobby (not that I have anything against nerdy hobbies).

I wholeheartedly believe that we need to affirm and protect human dignity in our economic lives as well, but it would be a shame if all we ever did was talk about it rather than live it in the factory, office, cafe, home, bar, or restaurant. As it turns out, those places are filled not with “mankind” but with a bunch of annoying people.

And of course, if we’re honest, we know that we bring our fair share of neurosis and nerdery to the party as well.