Would we toss coins at Jesus lying in the street gutter?  And how would we, likewise, hold ourselves accountable when serving a noble or princely figure? That is who the poor are and whom we discover in prayer as we discern best how to serve them. We then treat them literally like royalty, as they are “permeated by the presence of Jesus”, Francis says. […]

In a private audience Francis had yesterday with St. Peter’s Circle, a social action group serving Rome’s poor since 1869, the pope gave some excellent advice. He said that it is best for them to pray hard prior to administering charity to those in need.

Why is this so?

According to a Catholic News Service article, the pope told the young and idealistic volunteers that the secret to maintaining their “apostolic vitality” lays in their motto “prayer, action and sacrifice.”  The pope said that first priority must be especially given to the practice of prayer before acting charitably.

“If Jesus is present in the brother or sister we meet,” and we pray first, “then our volunteer activity can become an [effective] experience of God,” the pope said. “In the suffering of the sick, the solitude of the elderly, the fear of the poor and the fragility of the excluded” we find Christ’s face and discover compassion and the true meaning of service.

“Going out to meet the poor, bringing relief to the sick and suffering, you serve Jesus,” the pope said. Therefore, “every poor person is worthy of our care regardless of their religion, ethnicity or any other condition.”

Like any good Jesuit steeped in Ignatian spirituality and its practical wisdom, the pope appreciates the spiritual process known as prayerful discernment which, in essence, “involves prayer and weighing facts and feelings about the several good choices which ultimately leads to a choice about what is the best fit for an individual” and for ourselves.

The fruit of prayerful discernment is avoiding rash acts of our will that are not aligned with the God’s will and what is ultimately good for human flourishing.

It makes no rational sense to administer charity randomly, like thoughtlessly tossing a coin into a hat or signing a check over to an NGO we have never heard of. Without prayerful discernment, we treat the needy as superficial objects of our giving, usually for the mere good feelings that arise from giving itself and not for the just end to be served and obtained.

In random acts of giving we fail to know the poor as noble bearers of human dignity, of Christ’s image. We fail to know them as deserving sons and daughters of God who demand our utmost and careful consideration. Thus, we are not inspired by such immense love to commit to difficult strategic thinking –  using our brainpower, not just our heartstrings – for achieving the true good of the needy.

This is what Pope Benedict XVI argued for in his landmark encyclical letter Caritas in veritate (Charity in Truth), where he says there can be no loving action if not ordered toward the true good of an individual. As Benedict writes: “Caritas in veritate is the principle around which the Church’s social doctrine turns, a principle that takes on practical form in the criteria that govern [all] moral action.” (CV n. 6)

Would we be so scatterbrained if serving Christ in our household? Would we toss coins at Jesus lying in the street gutter?  And how would we, likewise, hold ourselves accountable when serving a noble or princely figure? That is who the poor are and whom we discover in prayer as we contemplate and consider how to serve them. We then treat them literally like royalty, as they are “permeated by the presence of Jesus”, Francis says.

In sum, as charitable givers to the poor and destitute God wants us to ‘up our game’. God wants us think carefully about how to best serve them. Just as a business person would want to properly and professionally serve a customer whom he cherishes. Or a lawyer might want to prepare well for the defense of his client.  In this way, we serve the poor with highest sense love and truth about the proper end to obtain.

What results is not only great spiritual gain for the giver, but also true justice received by the person in need of our aid.

So often we are reminded by the Acton Institute’s motto that we must unite “good intentions with sound economics.” So too must we unite “good prayer with sound charity”, since prayerful discernment orientates our charity to the proper intentionality as well as toward the just means and just consequences of our acts of love. 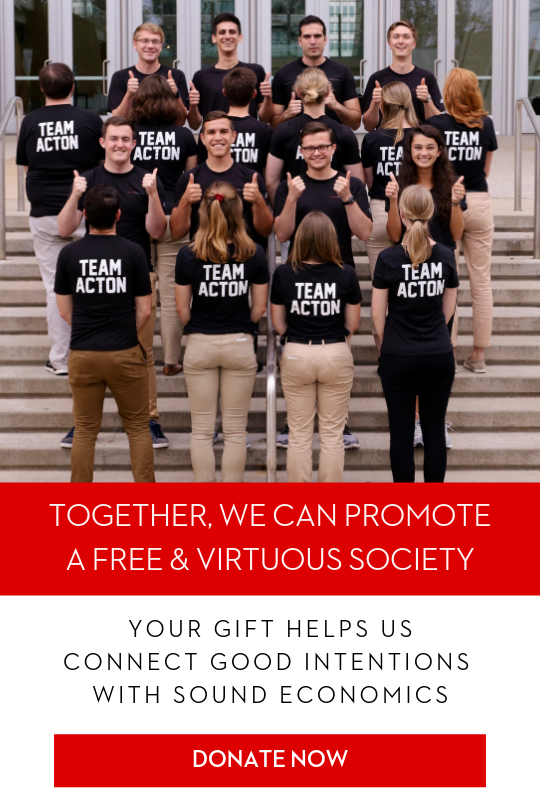