With unemployment and poverty levels at historic lows, why do so many people persist in believing people’s economic prospects are always getting worse? Why are discussions of current living conditions always marked by catastrophic thinking? Take, for instance, Congresswoman Alexandria Ocasio-Cortez’s recent assessment that “the America that we’re living in today is so dystopian.” The fact that her assertion is misguided does not mean it is not widely shared.

One answer to America’s dyspeptic discourse is found in the Fraser Institute’s new report on “The Causes of Poverty,” by Christopher A. Sarlo. The report, which states that following the “success sequence” reduces the chance of living in poverty by more than 99 percent, offers a thorough examination of how to measure poverty.

Sarlo notes that statists seek to increase the number of people mired in penury, at least on paper, by raising the threshold:

Finally, social justice advocates (mostly teachers and professors) want to impose a socialist system on our economy. For them, poverty is a defining issue. If they are able to convince enough people that poverty is high and rising, they can blame it on the existing structures and presumably make an easier case for the fundamental change they desire.

This, in part, explains why governments have inflated their definitions of “poverty.” Instead of measuring those unable to afford necessities, nations such as the UK redefine poverty living below 60 percent of the national median income:

Of course, a “compassionate” definition of poverty (i.e., relative poverty) serves their purpose very well. It allows them to inflate the numbers, create a crisis, and manufacture the obvious need for radical change. This is in no way to malign the genuine sentiments of some who truly want poverty eliminated. However, we do have to appreciate the incentive structure and the power of special interests here. There is simply lot of rent-seeking behaviour within the state. So, despite their stated goal, few in the poverty industry actually want to reduce poverty. They have every incentive to keep it high and growing.

This is true in the United States, as well. The Center for American Progress encouraged the Obama administration to replace the federal poverty level with an undefined “decent living standard” in 2009. This measure “would likely be considerably higher than even an improved poverty measure.”

While CAP makes one valid criticism – that federal poverty guidelines make few adjustments for geographical variation (although the government has calculated separate guidelines for Alaska and Hawaii since the late 1960s) – its key complaint against the current standard is:

The thresholds are low. Living costs and standards have changed in many ways since the 1960s. Food now comprises only about one-seventh of an average family’s expenditures. The poverty line represented nearly 50 percent of median income for a family of four in the early 1960s, but now represents only about 28 percent of median income. So the level at which a family is considered poor has fallen further and further outside the mainstream.

CAP seems unhappy that the average American has more disposable income, because food prices have dropped and the U.S. median income has increased about 10 percent since the federal government developed poverty thresholds in 1963-1964.

Economic interventionists envision government technocrats (directed by themselves, of course) deftly setting all wages and prices according to their own criteria. However, the public will not consent to this vision if there is no crisis to solve.

The free market makes these mass allocations one transaction at a time. Hundreds of millions of Americans, and countless transactions wired in from overseas, divide the national pie in a way that maximizes each individual’s happiness.

A free market, couched within a virtuous society, assures that people have adequate incentive to work full time; that they earn their living by serving the needs of others; and that those aims are directed to the flourishing of all society.

A free and virtuous society that creates human flourishing is the best vaccination against socialism. 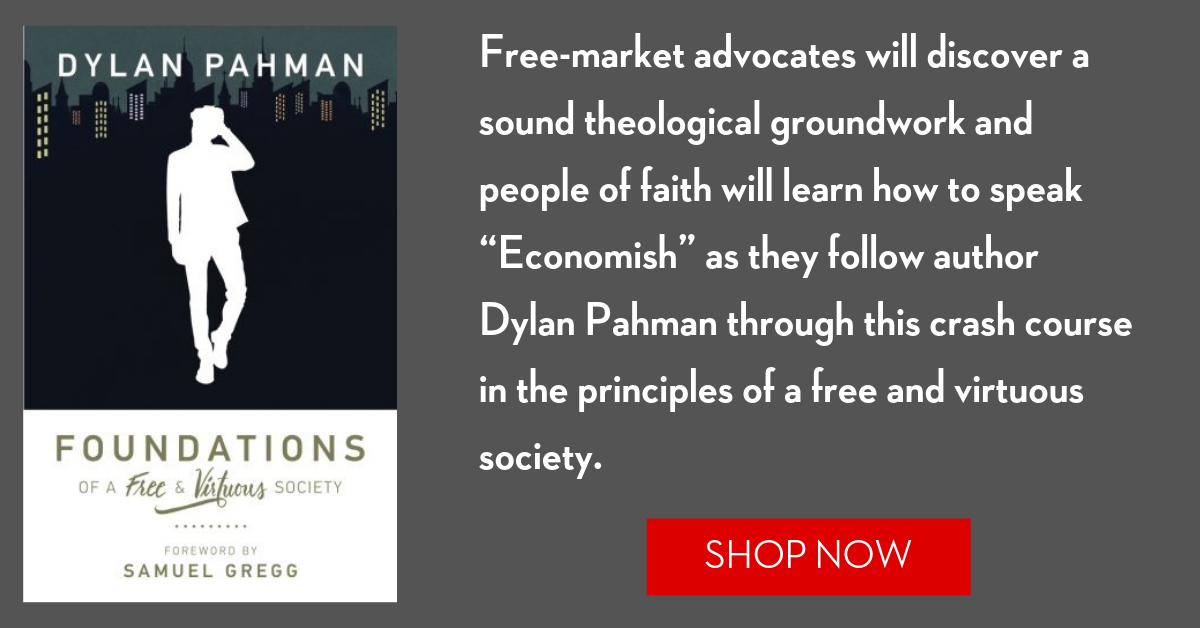