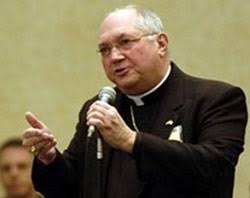 Yesterday in his personal column for the Diocese of Madison’s Catholic Herald, Bishop Robert C. Morlino issued a call to arms to Catholics battling for their religious freedom.

But such a battle, he says, is one that should emulate Christ’s loving nature, while being resolutely clear and firm in rejecting the obligation of Catholic institutions to provide healthcare that includes contraceptives and abortifacients under the Obama administration’s controversial HHS mandate (see recent reactions below on EWTN by U.S. bishops and Acton’s President, Rev. Robert Sirico).

While no doubt the Madison bishop is aware of Christianity’s bloody history of self-sacrifice in defense of religious liberty, any fight should not, in his opinion, automatically involve escalations of physical violence and warfare.

This non-violent perception is very unlike that of the Hollywood film of heroic Catholic martyrdom – Cristiada – which I reviewed last week at a Vatican screening. Perhaps many of us might daydream of Bishop Morlino trading in his miter for a sombrero and staff for a rifle to become the invincible Zorro-like Generale Gorostieta of the Cristiada film – gunning down one federale after another all the way to a Catholic coup d’état of ObamaCare.  Surely mental fodder for another Hollywood epic drama!

For this Catholic bishop it is the simple power of Christian Truth and Charitable Love that will help Catholics prevail in their frustrating battles with the U.S.  government.  The laity need to arm themselves with these two great weapons of faith. Bishop Morlino believes in putting up a good fight, especially one that respects the Vatican II’s encouragement of building up an effective, reasoning Catholic culture of  “lay mission”.

In witnessing the 500-strong that protested peacefully in front of a Madison federal building, Morlino was proud to see the laity shouldering the burden in defending Catholic religious liberty in a charitable, yet determined fashion:

I was privileged to be a witness to religious freedom and freedom of conscience with nearly 500 faithful people at the Federal building in downtown Madison. Such rallies had been quickly organized around our nation and I know that not all who might have come were able (or even aware of the events).

Those who were able to gather, however, were in large part Catholic (though not all), and in being there, they were really doing what the Second Vatican Council meant by “lay mission,” that is, applying the standards of God’s Kingdom to the real world.

That is the true role that the Church was trying to enliven in the laity through Vatican II — faithful people witnessing actively to today’s world, bringing the Church into the world of today (as opposed to the idea that the main way one can be an “active” Catholic is by performing different liturgical roles)…

To read the rest of Bishop Morlino’s column and his pastoral advice to Catholics go here.