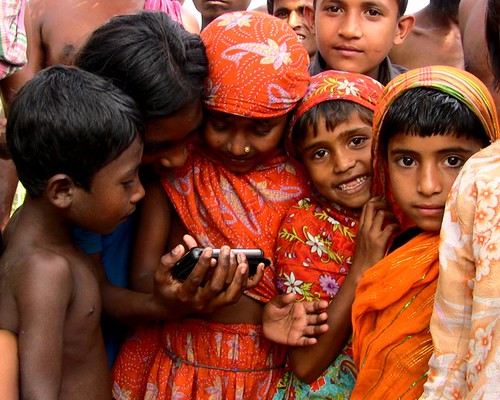 A recent report by the United Nations states that out of the world’s seven billion people, six billion have a mobile phone, but only 4.5 billion have a modern toilet. In India, there are almost 900 million cell phone users, but nearly 70 percent of the population doesn’t have access to “proper sanitation.” Jan Eliasson, the UN Deputy Secretary General has called this a “‘silent disaster’ that reflects the extreme poverty and huge inequalities in world today.”

Despite the lack of sanitation, most people are able to afford a mobile phone with a wide range available for [$15] or less and the price of calls reducing from [15c] a minute to [3c] a minute in the last decade.

This report focuses on the negative: the lack of sanitation for those in abject poverty, but it fails to note the extraordinary fact that people living in poverty have access to a device that was, until recently, a luxury item for wealthy Americans. Tim Worstall, a contributor on Forbes.com, addresses this report in a recent article:

It’s possible to be a little cynical about this phones versus thrones number though. Actual flush toilets aren’t in fact the problem. What is the provision of water to flush them and a sewage system to flush them into. Both of which are largely government provided. While mobile phone systems are largely private company provided. Whether you want to call it the lust for profit or the greater efficiency of the private sector, it won’t surprise the more right leaning of us that phones do have a greater market reach than toilets.

Andreas Widmer, president of The Carpenter’s Fund in Switzerland, has spoken a great deal about small businesses, aid, and investing in Africa. In an interview with PovertyCure, he explains causes of poverty:

Being poor has nothing to do with one or two dollars per day. Being poor has something to do with being excluded from networks of productivity and exchange, that means cell phones, internet, banks, financial systems, educational systems, trading systems to be allowed to trade, to have free trade, to have products from here that are produced here, to actually be allowed into other countries. If we’re not allowing that to happen, you can’t have entrepreneurs here grow their companies properly

Cell phones are now commonplace in poverty-stricken countries because of the work of dedicated entrepreneurs. Cell phones have also given many people the means to create wealth for themselves and their families. Michael Joseph, the founder and former CEO of Safaricom, the largest cell phone service provider in Kenya, gave an interview about foreign aid and the effect of mobile phone technology in Africa. He said:

Foreign aid changes people’s lives temporarily and that’s it, when it’s gone it’s gone. Mobile phones have made a huge impact in places like Kenya.

If you look at Africa in general, in the developing world in general, there is very little direct investment and very few jobs are created from the outside. People, particularly in Kenya, want to work, they need to work, they don’t just sit around and wait for people to come and help them. People in Kenya tend to be quite industrious. The mobile phone has been almost perfect for that because it allows people now to create jobs for themselves. They don’t always have to come to the city. There are now telecommunications facilities throughout Kenya so it’s helping people create small businesses.

In Kenya 70 percent of our economy is in the informal sector. This means that a lot of the people are just doing small jobs, or are small-scale farmers, they’re just doing work on the side of the road, they sell things, they’re traders. And they’re all doing it because the mobile phone has allowed them to do it. I’ve said many times I think half the GDP growth in Kenya comes because of the mobile phone revolution, not because of anything else. It has provided these people means of communication.

Particularly things like money transfer, which we have been doing now for nearly two years, it has made a huge impact on people’s lives.

Safaricom began a mobile banking service call M-PESA (which means “mobile money” in Swahili) a few years ago. This is a microfinancing service that allows anyone with a passport or national ID to transfer, withdraw, or deposit money. Users don’t need any kind of bank account, they simply need their mobile phones and then funds can easily be moved via SMS. This service has been tremendous for small businesses in Africa. It “has helped open opportunities for Kenyans and impacted many lives in many positive ways. M-PESA creates a feeling of comfort at the back of the mind of every Kenyan.”

Microfinancing has gone a long way to helping alleviate poverty. Muhammad Yunus, founder of the Grameen Bank, won the Nobel Peace Prize in 2006 for his work with microfinancing. Nobelprize.org summarizes Yunus’s work:

Banks in the traditional system have been reluctant to lend money to anyone unable to give some form or other of security. Grameen Bank, on the other hand, works on the assumption that even the poorest of the poor can manage their own financial affairs and development given suitable conditions. The instrument is microcredit: small long-term loans on easy terms.

When Grameen Bank was awarded the Peace Prize in 2006, more than seven million borrowers had been granted such loans. The average amount borrowed was 100 dollars. The repayment percentage was very high. Over 95 per cent of the loans went to women or groups of women. Experience showed that that ensured the best security for the bank and the greatest beneficial effect for the borrowers’ families.

Yunus began his work in Bangladesh in 1983; he was “fueled by the belief that credit is a fundamental human right.” He says that he “saw how people suffered for tiny little money, and they had to go to the moneylender to borrow the money and get started with their life and whatever activities they are involved with.” Now microfinancing occurs, not just in Bangledash through Grameen Bank, but all over the world. Services like M-PESA and the ease of buying and using cell phones has made it even easier for people to utilize microfinancing, start new businesses, and full themselves out of poverty. For a more detailed explanation of microfinancing, check out PovertyCure’s Microfinance page.

It is certainly a terrible thing that there are almost three billion people in the world living without proper sanitation. Nevertheless, that does not mean it’s a bad thing that all but one billion people have a working cell phone. Hard working and creative individuals are bettering the lives of millions. Microfinancing coupled with mobile phone technology is providing countless opportunities for people living in poverty to better themselves and provide for their families.